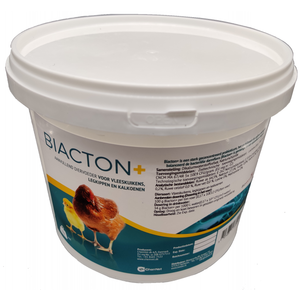 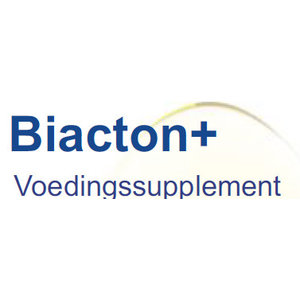 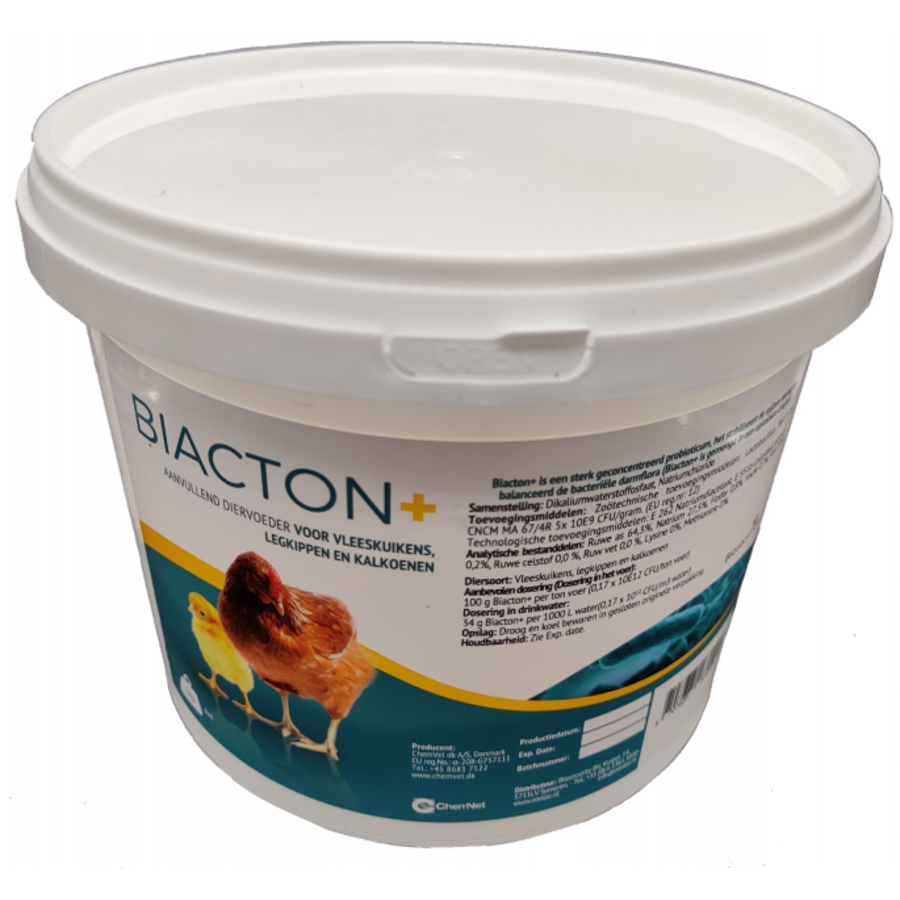 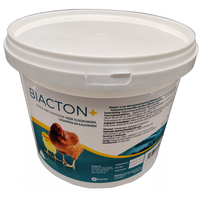 Biacton for poultry helps lower the gut PH from 7.5 to

The use of Probiotics for poultry.

Probiotics are strains of gut flora introduced to poultry through feed or drinking water.

The action of these gut floras on poultry has many benefits for the host recipient:

Please refer to our animated video for a better understanding of how poultry probiotics work.

Biacton is a probiotic feed or water additive for all poultry, turkeys, game and pigeons where the active part is a special and precisely selected strain of lactic acid bacteria, lactobacillus farciminis.

The development of Biacton has occurred with the basis in a request from the EU to find alternatives for the use of antibiotics as growth promoters in feed.

The active bacterium in Biacton is from a specially selected strain of lactobacillus farciminis. The strain is selected from a large number of lactic acid producing bacteria and strains for chickens, broiler & turkeys. The reason why the applied strain was selected was that on a number of points it differs positively.

The most important of these points is:

Biacton has shown, in vivo as well as in vitro, particularly good results and in vivo, it has promoted the growth of other acid-producing bacteria simultaneously with a number of Pathogen types being inhibited. As far as some bacteria are concerned, e.g. Clostridium and Campylobacter, they are to some degree close to being eradicated. Types of bacteria that comprise a threat to food safety are also inhibited so their numbers in the intestinal content is limited dramatically. This can contribute to increasing food safety.

Significant demands are placed on the effect and stability of this type of product when it is to be included in modern poultry feed production. Biacton fulfils all these demands.

The effect of of Biacton for poultry is documented, both in university trials and in practical production units. The documentation has been reviewed and found to be sound by the EFSA, which is the EU’s scientific organ with representatives from all EU countries.

In addition, company trials have been conducted in a large number of European countries that have confirmed the good effects for poultry from the scientific trials.

The effects of Biacton can be seen as improvements both in productivity and in the health of poultry. The improvements in health for poultry are primarily due to Biacton’s ability to inhibit the growth of other types of bacteria.

The productivity improvements can naturally fluctuate slightly between different livestock with specific problems, e.g. Clostridia with poultry, which can result in significant improvements in productivity. But, in general, the expected improvements are very much constant.